Skip to content
Previous
Are we losing our humanity to technology? 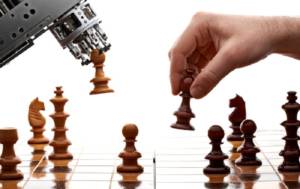 Are we losing our humanity to technology?

I’ve had a strange feeling about technology for several years. But I’ve never been able to find the right words or put my finger on why I’m somewhat hesitant to embrace it fully.

Until the past couple weeks.

Here are 4 headlines/articles that finally caused the light bulb to go off in my head:

I know this goes against most of today’s “conventional wisdom,” but I must ask if what we’re gaining with technology is worth what we’re losing?

What are we losing? A lot.

We’re losing our freedom. The foundational elements of our country are now, in some cases, being decided by a computer algorithm instead of a human. Who thought this was better? How did they convince others?

We’re losing our privacy. Do you really want Facebook to know that much about you? Will your life be improved? Please show me how.

We’re losing our morals, our sense of right and wrong. Even America’s pastime has been taken over by people who know more about software and spying than sacrifice bunts. I wonder if the Astros front office would do it differently, if given the chance? Probably not.

We’re losing our sense of community. If you ask the folks in Iowa, do you think they feel closer as a community, or more disconnected after the recent caucus debacle?

In case you can’t read the articles behind the firewall, here is a small sampling of phrases I found interesting, and disturbing:

I fully acknowledge that some will say I’m encroaching on the old guy, ‘hey, get off my lawn’ rant.

But that’s not what I’m saying. I’ve worked for several large companies, and this is something that has been brewing in my mind (and heart) for several years.

I’m certainly in favor of technology that makes our lives easier. As I wrote this article, I got an email from my local library letting me know that a book I had placed on hold was ready for pick-up.

What concerns me is technology that encroaches on who we are as humans. Technology that can separate us from our rights as outlined in the Constitution.
A couple more excerpts:

I think it all comes down to “could” vs. “should.” In a classic, and perhaps over-used clip, I love how Dr. Ian Malcolm succinctly put it in Jurassic Park:

This isn’t about young vs. old. It’s about “could” vs. “should” and maintaining our liberties.