Skip to content
Previous Next
What if sports parents had to walk a mile in umpire shoes? 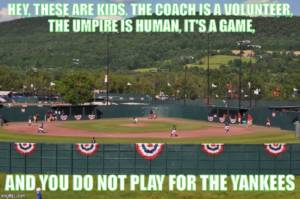 What if parents walked a mile in umpire shoes ?

In the latest incidents of sports parents acting like jerks, two recent episodes demonstrate why youth sports is, unfortunately, catching up with the broader culture.

Anger seems to be the dominant emotion, and I’m afraid of what our kids are learning.

The first chapter unfolded in Lakeland, Florida last weekend when a man punched a baseball umpire. After the game!

Apparently, he didn’t like a call that went against his nephew’s team, and he felt the need to express his dissatisfaction to a Little League umpire.

While the article doesn’t say how old the kids were, does it really matter? It also doesn’t say whether the umpire was paid for his work, or if he was a volunteer.

Again, does it matter?

We’re not ‘gonna take it

The second incident comes courtesy of “adults” in Newport Beach, Calif. While this one was captured on video (of course), I’m guessing there’s more to the story that we don’t see.

It appears to me that the umpire was trying to act professional and get people to calm down. But the “adults” were having none of it.

While talking to fans is not a best practice for umpires, it’s likely this wasn’t the only thing that had occurred during this game. I’m guessing the heckling had gone on for several innings.

In my short experience as an umpire, I make it a point not to talk with fans. Nothing good can happen. If someone is getting mouthy, I remind the coaches it’s their responsibility to control their fans.

Maybe this guy had already done that. Maybe the coaches didn’t care.

Again, does it really matter?

A mile in my shoes

As I’ve mentioned before, I recently started umpiring baseball at a local youth league. I love baseball and it’s a small way to give back to the community.

Which got me thinking… what if youth leagues required parents to umpire one game as a condition of playing in the league? How would that change their actions at the ballpark?

From where I stand, there are several benefits:

Finally, parents would learn the most important lesson: